Why Intel are TERRIFIED of what Apple's M1X iMacs and MacBook Pros will do NEXT MONTH! Intel is DEAD

All the clues are now pointing to Apple's M1X chips coming very soon - and I think we'll be seeing iMacs AND MacBook Pro 14" & MacBook Pro 16" with M1X in April 2021. This video explains why, as well as why they're going to WRECK Intel.

When it comes to software, really the best thing you can do is contact the developers of any software that won’t run on Apple Silicon that you need at this point and ask them if they have a timescale for you. Many do, and you’d know what’s going on better that way, and for the Vast vast majority of apps, Rosetta works great.

But of course, almost all of these niggles will be resolved even better when we get M1X, which I’m still expecting will be here in April. That’s what I though before the March event that may never have been, click up there for that story, went up in smoke. Why April? Well our headliner that we’d expected for March was iPad Pro, and it seems that those won’t enter mass production until the end of April now, suggesting a later release. We had leaks of 16” MacBook Pros being in production even before the November M1 announcement at Quanta computers from Mark Gurman at Bloomberg, and combined with the dwindling iMac range, that is why I think we’re about to see the whole M1X range come together, just as the M1 range did.

Now I know I’m out on my own here from most of the AppleSphere, but I think it makes sense. The Geekbench score I predicted back in November last year was 14193, placing it between the fastest iMac Pro ever and the 16 core Mac Pro. Of course M1X will also, was assume allow for more displays, and give even more performance on tap when emulating Windows if that’s your jam too.

The MacBook Pros are said to be dropping the Touch Bar but potentially adding OLED key caps to the function row instead, getting a boxier, flatter design and also picking up more of that sweet sweet IO that you all love so much, with possibly HDMI, USB A and MagSafe charging returning to the Mac. These could also debut with better FaceTime cameras, minLED displays and, on a more outside chance, titanium chassis for extra strength and lightness. Unfortunately we’re not expecting FaceID to unlock these just yet, but actually wearing an Apple Watch is basically as effective and there’s probably a decent crossover between people wanting the M1X in their system and already owning an Apple Watch.

From the iMac’s side, its bigger screens with smaller bezels, possibly up to 4k FaceTime cameras, miniLED displays, and my hope is that we see a new design that can fold down almost flat as a graphic tablet that works with Apple Pencil, though I think it’s more likely it gets a rotating display that can swing around to portrait mode.

And that would just leave our Mac Pro to be revealed, which I think will happen as a preview at WWDC and be released into the wild in late 2021, maybe December as has happened with previous Mac Pro and iMac Pro releases. I said from the DAY that Apple Silicon was released in November that I didn’t see Apple bringing a single new Intel based system or refresh, and now that seems pretty accurate.

Intel’s response was to lash out. They’ve put out very strange, specific “real world” tests where they’d switch out the chips on their side and the Macs on the other side to give their best possible performance delta. Then we got the I’m a Justin Ads last week, when Intel showcased laptops that had features that MacBooks didn’t, even pointing out that Apple only used a handful of ports that, honestly a lot of Windows systems use too. That Intel helped design, as a part of the USB consortium who designed Thunderbolt and USB-C.

Here’s why Intel was really scared and targeting Apple and M1 rather than AMD - Once people change to an Apple Silicon Mac and see how seamless things are with their iPhone, Apple Watch and more, they won’t leave. And now Intel is out in the cold.

I hope you’ve enjoyed this show - its a little different from normal as there’s not normally much weekend news - this weekend we lost those iMacs from the Apple site, so they’re a key part of the story. But let me know what you think of the format.

Why Intel are TERRIFIED of what Apple's M1X iMacs and MacBook Pros will do NEXT MONTH! Intel is DEAD 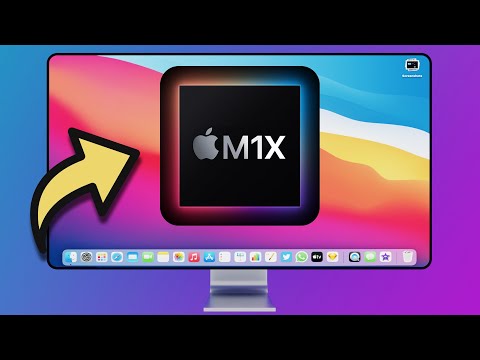 All the clues are now pointing to Apple's M1X chips coming very soon - and I think we'll be seeing iMacs AND MacBook Pro 14" & MacBook Pro 16&quo...