And here it is! The fifth generation MacBook Pro. Awaited 16 inch!

The quick and detail 4K unboxing of this beautiful monster machine maxed out directly from the Apple Store Online!


Apple unveiled the next-generation 16-inch MacBook Pro on November 13, 2019, replacing the 15-inch model from the previous generation. Similar in size to its predecessor, it has a larger 16-inch 3072x1920 Retina display set in a narrower bezel, the largest MacBook screen since the 17-inch unibody MacBook Pro that was discontinued in 2012. It has a physical Escape key; a Touch Bar, a multi-touch-enabled OLED strip atop the keyboard in place of the function keys; and a now-separate sapphire-glass-covered Touch ID sensor at the right end of the Touch Bar that doubles as a power button. It uses a scissor mechanism keyboard almost identical to Apple's wireless Magic Keyboard, providing more travel than the previous generation's "Butterfly" keyboard.

Like its predecessor, the 16-inch MacBook Pro has four combination Thunderbolt 3 ports that support USB-C 3.1 Gen 2 and dual DisplayPort 1.4 signals, providing 6016×3384 output to run the Pro Display XDR at full resolution. Any port can be used for charging, it includes a 96W USB-C power adapter. At launch only the included adapter and the Pro Display XDR provide full host power. Peripherals that delivered 87W for the previous generation 15-inch model, such as LG Ultrafine displays, are recommended to be used with a separate power supply. It also has a 3.5 mm headphone jack.

It uses the same Coffee Lake CPUs as the 2019 15-inch model. Purchasers can choose between AMD Radeon Pro 5300M or 5500M GPUs with up to 8GB of GDDR6 memory, up to 64GB of 2667MHz DDR4 memory, and up to 8TB of SSD storage. It includes better speakers, a better three-microphone array, and a 100 Wh battery, the largest that can be easily carried onto a commercial airliner under U.S. Transportation Security Administration rules.


Reception to the 16-inch MacBook Pro was generally positive. Laptop Mag called the keyboard "much-improved". The Verge praised the new keyboard, microphones, and speakers, but criticized the lack of peripherals such as an SD card slot. 9to5Mac criticized the use of a 720p webcam and older 802.11ac Wi-Fi standard, noting that Apple's iPhone 11 family included a 4K front-facing camera and faster Wi-Fi 6. MacWorld also noted the lack of Face ID. 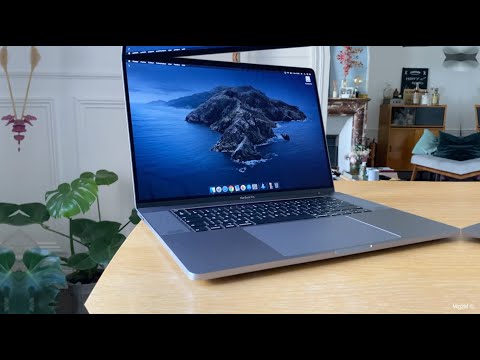 And here it is! The fifth generation MacBook Pro. Awaited 16 inch! The quick and detail 4K unboxing of this beautiful monster machine maxed out direct...