Is Apple ripping us off by charging ~$50 for a Apple Watch Sport Band when others are only charging ~$3 dollars? Is there a difference?

There actually is. The build quality of the Apple strap is noticeably better BUT is it worth spending the extra cash on it?

I would. Would you?

Over a span of 30 days, we did a variety of different tests to the a ton of fake and real Apple Watch straps. Our studio still smells like curry from the stain tests and that was over 4 weeks ago.

My Patreon Supporters got to see this video a few days before release! You can too! https://www.patreon.com/MobileReviewsEh

Sun Tests
-Left the straps in the sun for 30+ days. The fake strap showed a noticeable difference between the part that was exposed to the sun

Difference in dimensions
-The overall finish of the fake straps is much poorer than the Apple Watch Sport Band. The metal pieces (buttons and clasp) had finishes that were very rough
-The weakest part of the strap, the eye were the buttonless strap goes into, is a bit thinner on the fake band than the real one
-Dimensionally, the biggest difference was the weight. The fake bands were ~10g lighter than the real bands which makes a big difference in the stress and scratch tests that we did

Stain Tests - Round 1
-For the first round of tests, we submerged a real and fake strap in marinara sauce, a cola-like beverage, red wine, curry and peanut butter.
-The only bands that stained were the ones submerged in the wine and curry.

Stain Tests - Round 2
-After the first round, we decided that we needed to do more curry tests with other fake bands and oddly enough, there more expensive, fake bands did worse than the cheapest bands in our collection.
-After 21 days, the official Apple Watch Sport band had the least amount of staining from the curry.
-For this second round of tests, we also did stain tests with spray paint, cherries and nail polish. 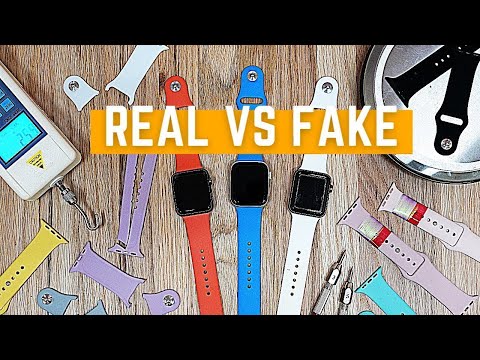 Is Apple ripping us off by charging ~$50 for a Apple Watch Sport Band when others are only charging ~$3 dollars? Is there a difference? There actually...