I’ve been switching between these three new Apple Silicon M1 machines for about 3 days now, so this is all super preliminary and super… ficial. But if you’re trying to make a decision now, now, now, I’m going to give you my first impressions, and I’ll throw a bunch of shots up on screen while I’m doing it for all you geeky and graphics benchers and deep in the workflow trenchers out there.

And keep in mind while I’m saying all this, M1 is the first, and therefore worst Mac silicon Apple is ever going to ship. It’s analog to Intel’s Y-series. Designed for ultra-low power systems, prioritizing efficiency as in battery life, the performance is not really but kinda incidental, and there will be more powerful chips both for the bigger Mac systems this generation, and future generations beyond this first set of chips to come. So, keep this as a baseline in the back of your minds. You know, because they’re about to be blown.

All of these Mac max out at 16GB of LPDDR4X RAM, but so do the systems they’re replacing, and Apple is good enough with memory compression, ultra-fast swap, and other mitigations, that for these types of ultra low power, entry-level systems, it’s just a non-issue.

Also, the Intel Macs all have Apple T2 co-processors, which are basically A10 chipsets, which will help out for things like H.264/265 encode and decode, so for some tests it’s not even a fair fight.

Still... the results are suprising! 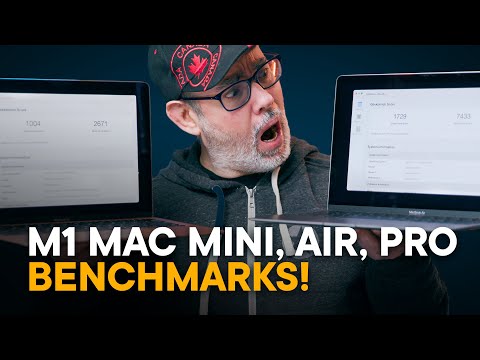 M1 Benchmark STONKS! For Discord, early access, and more, join my Patreon at https://www.patreon.com/reneritchie I’ve been switching between these thr...